A lifetime of dignity for people with disabilities starts in early childhood. Last week, two living legends in the field of disability policy and family professional partnerships spoke about ways to infuse dignity and trusting partnerships into the research, policy and practices at the Anita Zucker Center for Excellence in Early Childhood Studies and in the communities it serves.

Ann and Rud Turnbull, founders of the University of Kansas’ Beach Center on Disability and distinguished professors emeriti, drew nearly 80 students, faculty, scholars and state and community partners for a day of presentations, discussions and identification of actions to be implemented during the Anita Zucker Center’s inaugural Early Childhood Symposium Series.

“We’d hoped the Turnbulls would accept our invitation to speak at our inaugural Symposium because we revere Ann and Rud and their work,” said Patricia Snyder, Center director. “They embody every principle that guides our work.” 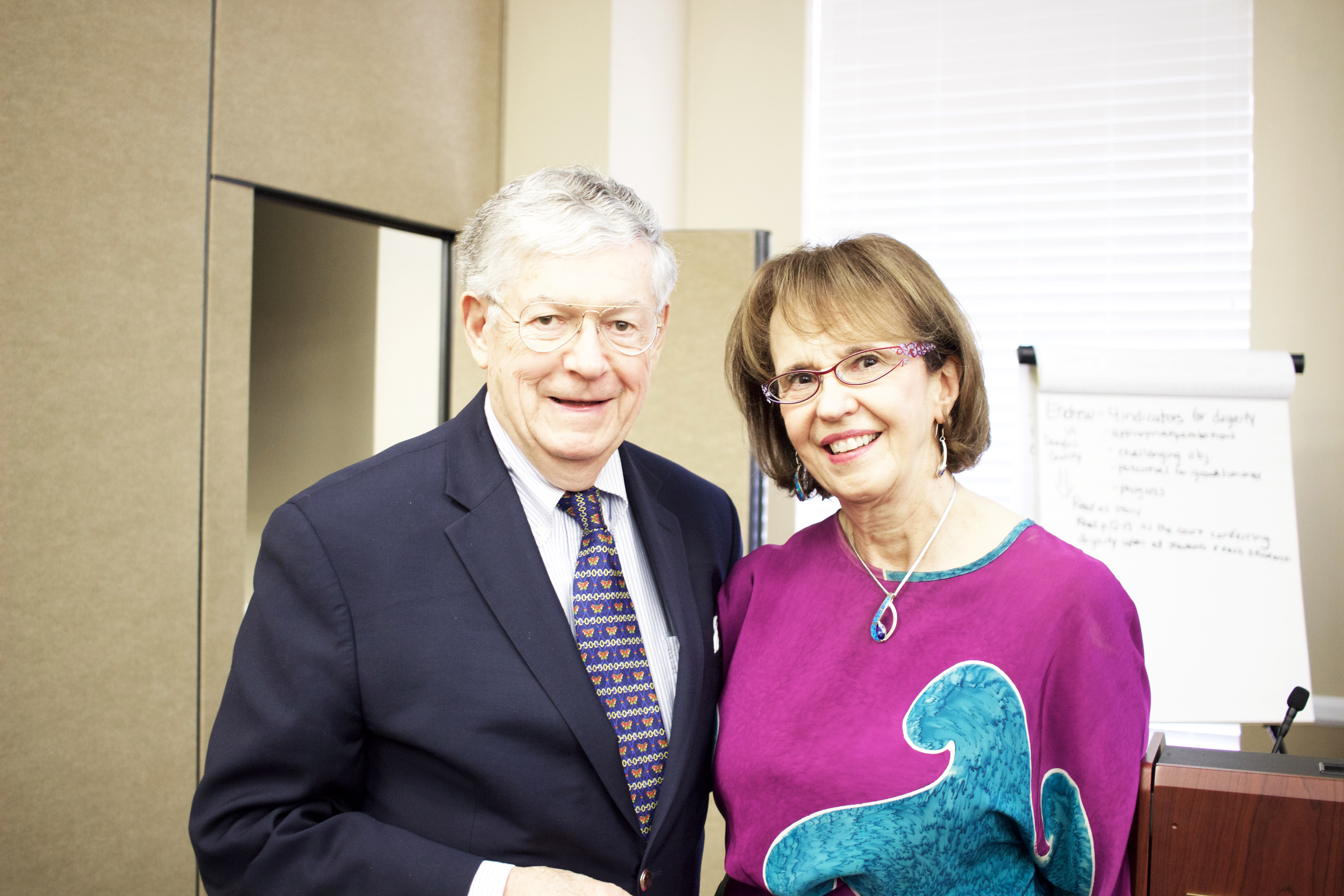 Convened by the Anita Zucker Center and the School of Special Education, School Psychology and Early Childhood Studies, the event centered on the Turnbulls’ decades of experience in research, practice and advocacy inspired by the joys and struggles of their son with intellectual disability, autism and emotional-behavioral disability, Jay.

“Doctors said to put Jay into an institution and forget about him. The notion that Jay did not belong anywhere but an institution is in itself a profound statement of segregation,” said Rud Turnbull. “But integration is the antidote to segregation. It’s also one of the core elements of equality.”

Turnbull presented an overview of 18 core concepts in disability and early childhood policy and law, as well as the nine ethical, constitutional and administrative principles that should guide future policy, research and practices.

He explained how these concepts and principles affect so many legal cases, statutes and decisions, including one recent case of a child with autism and attention deficit disorder whose parents sued for equal education and access (Endrew, F. vs. Douglas County School District). The ruling could have implications for the 6.5 million students in the U.S. with disabilities.

“This Supreme Court of the United States’ unanimous decision was a statement of the court conferring dignity upon this student, and therefore upon all students,” he said. “You will be taken — not by the guts of the decision — but by the tenor of it.”

He urged the group to ascribe dignity to young children — and their families. Ann Turnbull built upon that theme, presenting an analysis of family partnership and engagement from the federal level to local schools and services, and the six guiding principles that frame the relationships.

At the Beach Center, Ann spent more than 15 years convening focus groups to better understand what it took to either make partnerships work well — or fail. Building trust through communication and competency is the foundation of success for parents and caregivers, she said, but so is empathy, commitment, flexibility and simply being present.

“Families want professionals to be advocates. So often, we assume parents can speak up for themselves — that’s a heavy responsibility,” she said. “We need to collaborate and help families go the full distance of time, from early childhood to adulthood. How can we advocate for a full life of dignity?”

Attendees broke into working groups to reflect on the Turnbulls’ presentations, and to brainstorm ways to address what Ann and Rud say is the next step for the next generation of disability and early childhood advocates: Finding ways to infuse dignity into our daily work with young children and their families.

“Think in terms of the core concepts through the lens of dignity,” Rud encouraged. “No matter what the disability, the child still has an inherent dignity that cannot be taken away.”

The Turnbulls look forward to continuing their partnership with the Anita Zucker Center and the University of Florida to collaborate on research, policy, and practices that support young children with or at risk for disabilities, and their families.