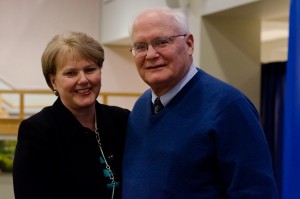 For Patricia Snyder, being named the first occupant of the David Lawrence Jr. Endowed Chair of Early Childhood Studies at the University of Florida was a natural fit.

For pre-school children in Florida, Snyder’s selection to the $1.5 million teaching and research post means they now have a leading scholar in early education and care working on their behalf.

Snyder’s recent appointment places her in a prestigious professorship named for one of Florida’s most prominent advocates of the school-readiness movement, which focuses on smoothing the transition to school for young children who are likely to start school unprepared.

UF created the endowed chair last year in the College of Education, hoping to attract a world-class scholar to lead collaborative, cross-disciplinary research and develop programs addressing the complex needs of children from before birth to entering kindergarten.

Snyder’s credentials seem the perfect match. Her work and leadership in linking public and private sectors on behalf of early education and care spans nearly 30 years, most recently at the Center for Child Development at Vanderbilt University Medical Center (2005-07) and the Louisiana State University Health Science Center’s School of Allied Health Professions (1984-2005).

At LSU, she was the founder and first director of the state-designated Early Intervention Institute, where some 40 faculty and staff conducted interdisciplinary research, teaching and community service activities focused on early childhood development. The institute also served as the academic home for Journal of Early Intervention, a leading refereed scholarly journal in early childhood intervention that Snyder edits.

Snyder has a bachelor’s in speech-language pathology, a master’s in special education and a doctorate in early childhood special education from the University of New Orleans. She also completed a pre-doctoral fellowship at the FPG Child Development Institute at the University of North Carolina at Chapel Hill. Before starting her higher-education career in 1984 at LSU as an instructor and early-interventionist, she worked as a children’s speech and language therapist in community-based early childhood programs, at a high-risk, follow-up clinic for infants born prematurely, and as a preschool director and teacher of young children.

“I gained insight early in my professional career about the importance of linking health, education and social service systems to support and enhance child and family well-being,” Snyder said. “I was mentored by colleagues who stressed the importance of being ‘family-centered’ in interactions with children and families, long before this concept gained widespread recognition.”

Now Snyder is the consummate teacher and mentor, as evidenced by awards she received for those traits at the LSU Health Sciences Center. Her administrative experience in higher education includes serving as department chair, director of grants and research, and associate dean for research and graduate studies allied health professions.

She has served on numerous editorial boards of journals in early-childhood special education and has generated more than $11 million in research and training grants in her career, including several from federal funding agencies.

Her leadership experience in interdisciplinary research was a key factor in her selection, according to UF Education Dean Catherine Emihovich. Snyder also has led local policy boards and state interagency coordinating councils focused on integrating programs and services for young children. She was a governor’s appointee on Louisiana’s Children’s Cabinet Research Council.

“About a third of all children begin kindergarten already behind,” Emihovich said. “There is a growing recognition of the need for collaborative, policy-oriented approaches to fully address the complex needs of children from before birth to age 5. As the first occupant of the David Lawrence Chair, Dr. Snyder will help to bridge the existing research gap in early childhood development.”

Lawrence, an active UF alumnus and the namesake of Snyder’s new professorship, retired in 1999 as publisher of the Miami Herald. He now is president of the Early Childhood Initiative Foundation in Miami and joined the UF faculty in 2001 as the University Scholar for Early Childhood Development and Readiness. Some 80 individuals and children’s advocacy groups donated more than $1 million in 2006 to create the Lawrence endowed professorship at UF, with the state contributing another $500,000 under Florida’s matching gifts program.

Lawrence’s Miami foundation and UF were recently selected by the W.K. Kellogg Foundation to share a $10 million grant to roll out a research-proven model of early childhood intervention—emphasizing intensive school and community involvement—in Miami public schools and then bring it to scale in other interested school systems in Florida and other states.

Snyder is expected to play a key role in that initiative, called Ready Schools Florida, along with her teaching and collaborative research leadership activities in the College of Education’s heightened emphasis on early childhood education and health.